You'd think being a Maid of Honor for a friend would be great, not in my case.

I was 23 years old when asked. The bride and groom were older, she was in her 30's and Bob was maybe 50. Not sure, but he was quite a bit older than Kathy.

Plans were made, it was a pot luck reception and I made the wedding cake since I loved cake decorating.  Everything seemed to fall into place.

The morning of the wedding we went to get our hair done in up dos. We got dressed and were picked up to go to the church. Waiting for guests to be seated and the ceremony to begin, I was informed we would be going to the Marina for photos after.

The ceremony went well, I noticed the groom didn't have his teeth, only his two fangs were showing.  It made for some interesting photos.

The car was waiting for us to head to the marina. It was nice and sunny, flowers were blooming, water and boats behind us, a perfect backdrop.

After the photos we head back to the parking lot to find out Bob sent the car back figuring we could walk to the reception since it wasn't that far.   May not have been far, but we had the main street to walk.  What the hell, I'm never surprised when things go wrong.

As we start our journey, Bob decides he needs a coffee and wants us all to go with him for a drink. He chose the DIVE with the worst reputation. Stools at a counter and people staring at us.  Remember, we are in wedding attire.

After having coffee we headed out to the main street to continue on our way. Four of us walked arm in arm down the sidewalk, with some of their guests following behind. Cars honked, people yelled, a couple photos were taken. I just went with the flow and hoped they enjoyed their day.

The reception was interesting. We ate, we danced, they argued and Kathy pulls out a knife on Bob and threatens to kill him. Someone gets the knife away from her and next thing Bob claims he has stomach pains and lies on the floor.  I didn't see blood so, I guess that was a good thing.  He wants to go to the hospital but, no one wants to go with him. The bride wasn't going to miss her party. Guess who ended up taking him?  Yes, it was me. We grabbed a cab and sat in the emergency department, in wedding clothes, Bob telling the entire story to anyone who would listen. We had stares and many questions.

Guess what, HE WAS FAKING!  He just wanted his wife to worry.  He didn't want to take a cab back so, there we were, waiting for the Main Line city bus.  I was a little frustrated by then.

We get back to the reception, and there is the bride, on the dance floor with my brother, trying to feel him up. Everyone was drunk, some clothes were discarded and the groom found a spot and went to sleep, while the party continued.

Time to cut the cake, I wasn't taking chances, so I found a butter knife for the bride. Of course, there was a cake fight, that the guests joined in on.  At that point I decided it's time for me to leave.  The cab ride was the only part of the day that was peaceful and uneventful.

Three months later, they had a baby boy after they tried killing each other again.  The child was taken away from them from the constant fights, but they stayed together until Bob died 3 years ago. No, she didn't kill him.

I decided I was done with being in a wedding party again, until years later when I stood up for a friend as she married my ex.

This time I mean it when I say, "Never again!" 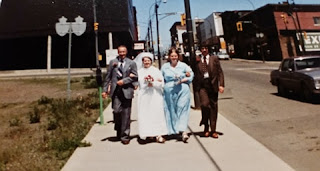 Going to spend a few days in a trailer at my Aunt and Uncles farm was something  I loved as a teen. I'd take one of my friends and have a great time. Usually we did something to cause problems. One afternoon my friend Judy and I noticed the fence to the cow pasture was broken. We didn't want t he cows getting out and  decided to try and fix the fence. We could later brag to my Aunt and Uncle how we saved the cows and fixed the fence. No matter how we tried, we couldn't get the fence up and had to come up with another idea. I had a brilliant thought, we would coax the cows and bull into the barn and tie them up.  We got them all into their stalls, but there was a problem. The bull wasn't happy.  He was restless and causing a ruckas.  Judy went in his stall and was cornered as she tried to secure him to the post. He just kept backing out and snorting. I had another brilliant plan. I was going to go outside the barn door and close it so the bull wouldn't see the light
Read more 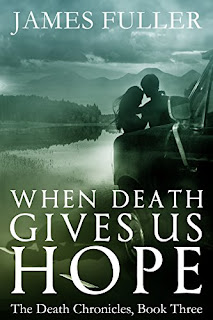 When Death Gives Us Hope: The Death Chronicles: Book Three The Author is brilliant in this 3 book Erotica series.  This book continues after the death of Conners brother William, whose life was taken by a Vampire that was brought back to life after Centuries of entombment.  Conner is determined to destroy him and get his revenge for Williams demise. The mystery of the story deepens with every turn of the page. There is the addition of new characters, who play a vital part of the story. It  leaves you at the edge of your seat, waiting for the next twist in this jaw-dropping story.  You can never guess what will happen next because you will be wrong.  This isn't the typical Erotica story of constant sex, it is a story like no other that gently leads you to the erotic encounters that are very well-written, while satisfying your curiosity of the story line.   It's phenomenal to see a male author with such imaginative skill writing this magnificent creation of adventure, sex,
Read more

I'm going to join the Carnival 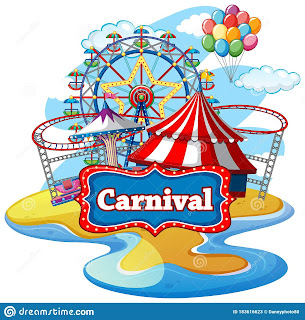 I'm sure many of us have made our way to carnivals as teens. Wanting to try every ride with our friends. Eating all the goodies that you only get from the concessions.  Playing all the games to try and win a cheap stuffed animal that you spent way too much on, knowing you could have bought a better one at half the price.  Throwing up from eating too much and going back on the rides, toting the big teddy bear with you. Those were fun times and a great part of childhood. You could always make friends with the carnies and get a free ride or a free stuffie. I became friends with a young girl who was running the tilt-a-whirl. I was 16, she was the same. She left with the carnival because of a bad home situation.  I found out during our conversations that many of the young people at the time were only 16 to 20 years old. Most had the same stories. They said travelling with the carnival from place to place was better than being at home.  They looked after each other, had a place to sleep
Read more